An Open Letter to Tom Brady:

Dear Mr. Brady/Tom/Tommy Boy/T-Braidz: Thank you for sharing your college resume on Facebook for all of us to admire and be inspired by. I’m sure in your heart it must be a comfort to know that if this whole NFL Quarterback/Part-Time Model gig doesn’t work out, there will always be an Assistant Clubhouse Manager position waiting for you at the University of Michigan golf course. Because roughly one-third of our office are Patriots fans, we’d like to pay you back for all the years of joy you have brought us (excluding any and all Super Bowls against the New York Giants) and offer you a basic resume critique! No, no, Tom, put your wallet away – it’s on us.

“Found my old resume! Really thought I was going to need this after the 5th round. #tbt“- Tom Brady

However, this also means that we’re going to be honest with you here, just as we would any of our clients who aren’t married to Brazilian supermodels. The truth is this: You are SO lucky that Bill Belichick picked you in the sixth round of the 2000 draft, because this resume would not have gotten you anywhere. It’s okay, Tom, some of us go to the Pro Bowl nine times, and some of us write Pro-Bowl resumes. You can’t have both, that would be unfair. So let’s take on some of the places you went wrong: 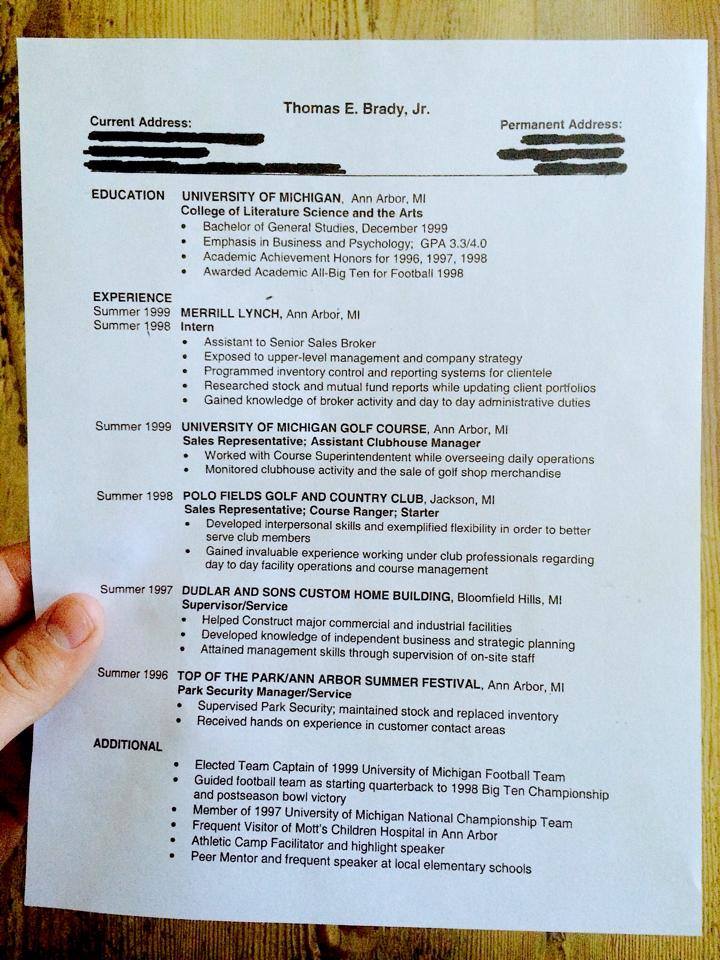 Now, I know, much to the dismay of the entire Northeastern United States, that you can’t play pro football forever. When that day comes, I just want you to know that we’re here for you. It can be tough to transition away from a fifteen-year career, but we specialize in helping people do just that. So here’s some bullet points you can use to update that baby when the time comes.

Okay, maybe that last one should be left off, but you get the idea. You can tell we’ve put some thought into this, just like we do for all our clients, so just give us a call before you start thinking about retiring.  We’ve got your back.

“That really hurt. Maybe I should start getting my resume ready.”